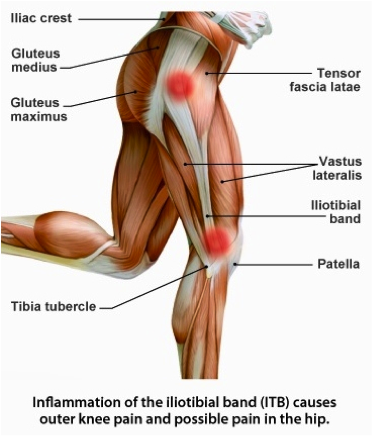 Does the outside of your knee hurt, especially when you bend it? This is likely the iliotibial band (IT band). The IT band is the thick band of dense, connective tissue (fascia) that runs along the outside of the thigh. It stabilizes the outside of the knee as it flexes and extends. It was once thought that Inflammation can cause the IT band to tighten and rub against the bones of the knee as it flexes and extends. Recent research* suggests that the actual issues revolve around added compression on these thick, fibrous bands causing the loose, connective tissue to be pressed against bone. As these tissues are more compressed, the bending of the leg at the knee and rotation of the leg inward or outward cause pain.

Usually this type of injury is the result of overuse. Iliotibial band syndrome is often experienced by runners and cyclists, but can come from overdoing any type of repetitive movement. Though this type of injury is not major, ignoring it will cause problems. Over time, one could expect decreased range of motion and constant pain. A troubled IT band can also cause the leg to turn inward slightly causing back and hip pain.

One of the most common things people are told to do is to foam roll. The goal of foam rolling is to compress and lengthen muscle. The problem is that the IT band is not a muscle; it is actually a thick band of connective tissue. The second reason that foam rolling your IT band will likely not help very much is that it is actually attached to the femur bone. No matter how much you roll it, the IT band will not stretch it because it’s connected to the bone.

So how do you get relief?
For that, we have to look to the hips. The muscles connected to the IT band at the top include a small TFL (tensor fascia latae), the gluteus medius and even the tendon of the gluteus maximus.

The TFL is a small muscle. When it contracts, it does not invoke movement; it just stabilizes. Most of the active stability work comes from the glutes. Specially the glute medius its role is to dynamically stabilize. If it’s weak or has poor blood flow, it can’t do much to stabilize your knee so the small TLF tries to kick in and tighten, which pulls on the IT Band. Being a small muscle, it is just not cut out for the job.

How does acupuncture work?
The goal of acupuncture treatment would be to open the blood flow to the gluteus medius and gluteus maximus areas using tuina (massage) and specific orthopedic movements. We would also seek to release knots and tight ashi spots (translated as “OH YEAH” or painful points, now commonly known as trigger points) not only in the hips but also on the legs, so that we can release the compressive force on the IT band and restore proper blood flow all around. This type of injury usually responds very quickly to this type of treatment. One of the benefits of acupuncture for pain relief is that no matter what we are treating patients often remark on how relaxed they feel.